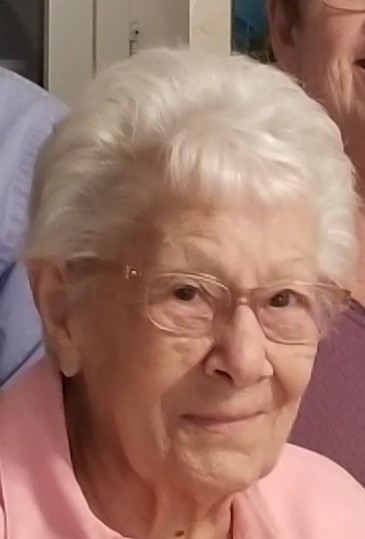 Barbara Nelle (Bott) Houghtaling was born the younger of twin girls on January 23, 1923 at home in Indianola, Iowa to Percy Cole Bott and Doris Georgia Lamb. She graduated from Indianola High School in 1941 and attended Simpson College for two years. She married her high school classmate Robert Houghtaling on October 28, 1943 and celebrated 51 years of marriage until his passing in 1995.

Barbara and Robert (Bob) had three children, Kenneth, Harriet and Charlotte. She enjoyed knitting, crocheting, quilting and sewing. She sewed clothes for her daughters in their younger years and made a lot of her own clothes up until the last five years. She had the patience to figure out any kind of craft or pattern.

She was employed at Simpson College and First Methodist Church as a secretary, McKee’s Fabrics, Grahams Department Store and Finance Secretary for the Indianola Community Schools until her retirement in 1988. Bob became a bus driver for Indianola Community Schools and Barbara would ride along on the transports of the athletes to their games. She was known as “Grandma Barb” to many on and off the bus.  She would collect shiny pennies of the current year and rub them while watching Indianola High School Sports. After the game she would give those pennies away to the athletes. She also enjoyed watching sports on television.

Throughout her life she was a member of the First Methodist Church, seventy four year member of Easter Star, lifelong member of Alpha Chi Omega Sorority, Friends Night Out club, NOWATA of Milo, Indianola Federated Music Club, Warren County Historical Society working many years at Pioneer School Days and many other events.

Barbara died peacefully on Tuesday, August 20, 2019 at her son’s home in New Port Richey, FL. She was 96 years, 6 months and 28 days old. She was a loving wife, mother, sister, grandma, great grandma, aunt, dear friend and adopted “Mom” of many.

Barbara was preceded in death by her husband, parents and twin sister Helen Knox.